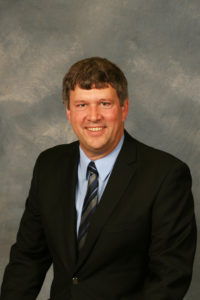 Pete Hellie was elevated to President of North Star Mutual effective May 6, 2020. Hellie recently served as Executive Vice President and CFO of the company, and his transition to President comes following the announcement of Chief Executive Officer, Jeff Mauland’s, plans to retire in early 2021.

“It is a real privilege for me to announce Pete’s promotion to President,” said Mauland.  “Pete has done a great job and will be an outstanding leader for our company. I look forward to our continued success in the years ahead.”

Hellie is a native of Cottonwood, Minnesota and joined North Star in December 2008 as Vice President of Finance. Prior to working at North Star, he managed Norwegian Mutual for 20 years, which operated out of the same building as North Star in Cottonwood. During this time, he and his wife, Joy, raised two children, Andy and Kate, who now live and work in the Twin Cities.

In Hellie’s most current role as Executive Vice President, Treasurer and CFO for North Star, he had oversight of company investments, banking, accounting, internal audit, legislative and compliance issues. He is also heavily involved in managing the company’s reinsurance program.

During Hellie’s tenure in the industry, he has participated on numerous committees and, most notably, served as MAFMIC Chairman in 2008. He earned his Associate in General Insurance (AINS) in 2011 and Chartered Property Casualty Underwriter (CPCU) designation in 2012.

Hellie joined the North Star Board of Directors in 2019.

“North Star Mutual has adapted and grown over the past 100 years and has done it very successfully,” said Hellie in his outlook for the future. “The key will be to keep the momentum going and build on these past successes. As our past leaders and employees adapted to change, we must proceed with enthusiasm, passion, innovation and technology to best meet the expectations of our agents, Township Mutual partners, and especially our policyholders.”

We extend our congratulations and best wishes to Pete Hellie in this new capacity!

Your browser is out-of-date!

Update your browser to view this website correctly. Update my browser now